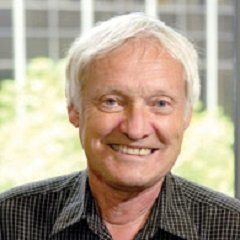 Prof. Joachim Frank is a Professor of Biochemistry and Molecular Biophysics and of Biological Sciences at Columbia University, and Distinguished Professor of the State University of New York at Albany. Born and educated in Germany, he received his Diploma in physics from the University of Munich. In his doctoral research, conducted at the Max Planck Institute for Biochemistry, Martinsried and at the Technical University of Munich, he developed methods of digital image analysis as applied to electron microscopy. In his postdoctoral research, in the United States and at the Cavendish Laboratory in Cambridge, U.K., he worked on problems of electron optics and image processing. In 1975 Prof. Frank joined the Wadsworth Center in Albany, New York, as a senior research scientist, where he developed the single-particle reconstruction approach and applied it to the ribosome. He moved in 2008 to take on his current position at Columbia University. Dr. Frank shared the Elizabeth Robert Cole Award of the Biophysics Society with David DeRosier for developing methods of three-dimensional reconstruction of biological macromolecules. He is a Fellow of the American Association for the Advancement of Science and the Biophysical Society and was invited by the Biophysical Society to give the National Lecture in 2005. In 2006 he was elected to the National Academy of Sciences, the American Academy of Arts and Sciences, and the American Academy for Microbiology. In 2014 Joachim Frank received the Franklin Medal in Life Science, bestowed by the Franklin Institute in Philadelphia and in 2017 the Nobel Prize in Chemistry “for developing cryo-electron microscopy for the high-resolution structure determination of biomolecules in solution”.